The phrase “common man” has wide political currency in India, with parties across the political spectrum using it, and it will likely be uttered many times in the coming weeks as India discusses its next budget. But who exactly is the common man or, in Hindi, the aam aadmi? 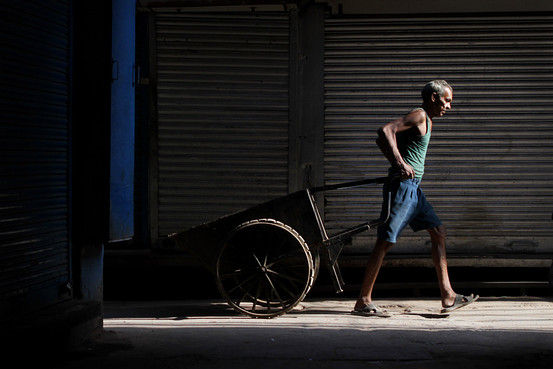 One person interviewed suggested that the phrase ‘common man’ encompasses everyone who works outside.

Is he the silent, moustachioed old man with a wisp of white hair, dressed in dhoti and jacket, such as the creation of Times of India cartoonist R.K.Laxman?Or is he Budhiya Das Manikpuri, the hapless farmer in the movie “Peepli Live,” who finds himself considering suicide as an escape from the debt trap? Or is he one of the rural folk from India’s drought-stricken Bundelkhand region who arrives at Delhi’s Sarai Kale Khan bus terminal seeking employment in the big city?
Politicians each have their own definition.


To ruling Congress party youth leader Rahul Gandhi, the “aam aadmi in India is that person who does not have a connection to the system. Whether he is poor or rich, Hindu, Muslim, Sikh or Christian, educated or uneducated, if he is not connected to the system, he is an aam aadmi.”


“We call him the common man but in fact he is unique,” said Mr. Gandhi during his party’s anniversary conference in December. “We will never build a nation until we build a system in which this man’s progress is based not on who he knows, but on what he knows.”


The party often speaks about its plans for the common man.


“Everything is being done for [the] common man and I think this budget will also reflect the desires of the common man,” Mohan Prakash, a spokesman for the Congress party, told India Real Time in a recent interview.

On the left, Basudeb Acharia, a senior member of the Communist Party of India (Marxist), defines the common man as “those who are below the poverty line. In India, common men are peasants, agricultural laborers and middle class who all constitute over 85% of the country’s population.”


But unlike Mr. Prakash, Mr. Acharia says he doesn’t expect anything new for the common man in the upcoming budget.

For the opposition Bharatiya Janata Party, the “common man is anybody who has a stake in the system but doesn’t have an effective say,” said spokesman Prakash Javadekar, “mainly those in the unorganized sector and the marginalized sections of the society.”


On how the budget impacts the common man, Mr. Javadekar sounded grim. “I don’t think [the] budget is going to benefit the common man because the government’s allocations for vital sectors such as education and health as part of GDP are still significantly low.”

“These are the sectors that concern the common man directly,” Mr. Javadekar added.

People in industry feel the definition of common man depends on the context in which the phrase is being used. “Reference is largely to the middle class who get affected by the changes in the tax slabs,” says Bidisha Ganguly, who does economic research for the Confederation of Indian Industry.

Even some of those who might be ranked among the common man seem confused about the definition.“Aam aadmi is the one walking by in the street,” said Sat Veer, a maintenance worker in New Delhi. “I work inside, so I don’t think I am [an] aam aadmi.”


But others subscribe to a broader definition. “Only the VIPs and very rich don’t fit the category, otherwise we all are aam aadmi,” Rajesh Yadav, a branch manager for a courier company, told India Real Time as he walked along an avenue in central Delhi.


As for Mr. Yadav’s expectations from the upcoming budget, he said: “I hope there will be steps to control the inflation, which is a huge issue for aam aadmi like us.”