Q: How can you tell your senior manager that they use a catch phrase too much in conversation? Phrases like "well obviously," "you know," and, my personal favorite, "to be honest" can cause them to disengage with their audience and diminish their effectiveness as speakers.

A: Your concerns are well justified, but you'll want to put a lot of thought into how you approach your manager on this topic. Just as important as what you say to him or her is how you say it. Depending on the relationship you have with your boss as well as the tone you use, it could work to bring you closer or end up causing a rift, say experts. 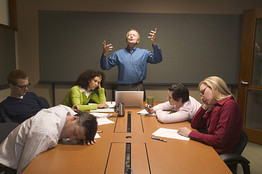 Getty Images
"Any time you are offering unsolicited advice, you run the risk of alienating versus helping," explains Jodie Charlop, founder of Atlanta-based career coaching firm Potential Matters. "It adds to the complexity if there is a power differential."
Timing also matters, says Tracey Trottenberg, a Los Angeles-based leadership trainer, coach, and speaker. "Catch them in a moment when they're more receptive and not racing around or short on time," she recommends. Still, the conversation doesn't have to be long or drawn out, she says. "It can be delivered simply and to the point."

How to Handle a Bad Boss
From Tech to Insurance and Back Again
Help, Google Knows About My Speeding Ticket
Have a question about your career? Email:cjeditor@dowjones.com
In addition to your tone and timing, you'll also want to consider your motivation. "If you are coming from a place of truly wanting to help [your] manager, then you'll have a higher probability of finding the right words and approach," says Ms. Charlop. But if you're bringing this up with your manager because the habit is driving you nuts, don't let your emotions push you to be too blunt.
It is quite common for people to feel like they need to correct or "fix" others, she says. Often, people justify their actions with the idea that they are helping the person in question. "But the fact is we are judging by our own personal standards," says Ms. Charlop.
When you're ready to bring it up, find a safe setting and ask permission to talk about something that you've observed in your informal conversations. "Share how it is impacting you," says Ms. Charlop. For example, you could say something along the lines of: "Bob, I value your expertise. I've observed in our conversations that you use the catch phrase 'you know' many times in our conversation -- so much, I find it hinders my ability to really hear you." Then, follow it up with a positive. "It's important to me that we have great communication."
Rather than singling out your manager, try to make him or her a part of a larger class or group, suggests crisis management expert Davia Temin.
Years ago, when Ms. Temin worked as a marketing director for a major investment bank, she was asked by the bank's president to help fix some of the senior managers' poor table manners. Rather than approach the managers directly, Ms. Temin says she hired two men to coach them as a group on communication skills. By Ms. Temin's design, the first meeting was held over breakfast in the corporate dining room and the bankers were handed copies of "Tiffany's Table Manners for Teenagers." Then, the consultants talked about the importance of table manners, she recalls. "I orchestrated it all, and the message got through."
Another approach is to put the onus on you, says Ms. Trottenberg. She suggests saying something along the lines of: "I've been learning about communication and that the fillers we use can make us less effective when we speak. I'm working on eliminating key phrases like 'you know' and a few others, and it might be something you want to do, too. I realize more and more that when someone says 'to be honest,' it can sound like they weren't telling the truth before, so that's definitely one to eliminate."
You could then follow it up by asking your boss his or her thoughts on the subject. "That's clean communication that opens up a discussion for more specific feedback and won't put your manager on the defensive," says Ms. Trottenberg.
Write to Elizabeth Garone at cjeditor@dowjones.com