The massive turnout and Mr. Qaradawi’s warning that the revolution is not complete demonstrate that if the military drags its feet on reform, another uprising could begin. And while his sermon was nonsectarian and broadly political, the turnout was also a reminder that political Islam is likely to play a larger role in Egypt than it has for decades.

Qaradawi is said to have broad appeal in Egypt, and his national profile has the potential to drive the role of Islam in the newly formed government:

“Qaradawi is very much in the mainstream of Egyptian society, he’s in the religious mainstream, he’s not offering something that’s particularly distinctive or radical in the context of Egypt,” says [Shadi Hamid, research director at the Brookings Institute’s Doha Center in Qatar]. “He’s an Islamist and he’s part of the Brotherhood school of thought, but his appeal goes beyond the Islamist spectrum, and in that sense he’s not just an Islamist figure, he’s an Egyptian figure with a national profile.”

Qaradawi’s ties to the Muslim Brotherhood run deep.
Al Jazeera reported in 2004 that the theologian had even been offered the leadership position of the Brotherhood that year. Abu al-Futuh, a Brotherhood spokesman, confirmed the offer with praise for Qaradawi. “Sheikh al-Qaradawi is an influential scholar and one of the Muslim Brotherhood’s spiritual leaders in the world. Any Muslim Brother would be honoured to have him as supreme guide…”
While Qaradawi refused the post for “health reasons”, he praised the “Muslim Brotherhood under whose umbrella I grew and which I so defended.”
His views on the role of Islam are often considered controversial or extremist, and his religious commitment to violence against Israel is well documented.
In a statement on January 30, 2009, Qaradawi praised the Holocaust, saying that, “throughout history, Allah has imposed upon the [Jews] people who would punish them for their corruption. The last punishment was carried out by [Adolf] Hitler… Allah willing, the next time will be at the hand of the believers.”
Qaradawi has been banned from both the United States and the United Kingdom after supporting violence against the West, saying “those killed fighting the American forces are martyrs given their good intentions since they consider these invading troops an enemy within their territories but without their will.”
“The UK will not tolerate the presence of those who seek to justify any acts of terrorist violence or express views that could foster inter-community violence,” explained a spokeswoman for the UK’s Home Office.
For gatherers in Tahrir Square, Qaradawi’s latest speech seemed to resonate Friday, according to the CSM:

After his speech, he read from the Quran, his voice cracking as he reached a verse on the fate of tyrants. Then the thousands settled into prayer amid a pin-drop silence before breaking out into shouts of ‘no to Hosni, no to his regime, no to his supporters. 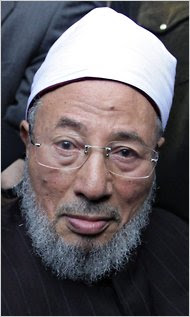 CAIRO — Sheik Yusuf al-Qaradawi, an influential Sunni cleric who is banned from the United States and Britain for supporting violence against Israel and American forces in Iraq, delivered his first public sermon here in 50 years on Friday, emerging as a powerful voice in the struggle to shape what kind of Egyptian state emerges from the uprising that toppled Hosni Mubarak.
On the same day, other signs of a changing Egypt emerged. The military warned restive workers that it would stop what it declared were illegal strikes crippling Egypt’s economy, declaring “it will confront them and take the legal measures needed to protect the nation’s security.”
It also allowed two Iranian Navy ships to pass through the Suez Canal — a first since the 1979 Iranian revolution and a move that some Israeli officials called a provocation. Egyptian officials reportedly said the ships did not contain weapons.
Sheik Qaradawi, a popular television cleric whose program reaches an audience of tens of millions worldwide, addressed a rapt audience of more than a million Egyptians gathered in Tahrir Square to celebrate the uprising and honor those who died.
“Don’t fight history,” he urged his listeners in Egypt and across the Arab world, where his remarks were televised. “You can’t delay the day when it starts. The Arab world has changed.”
He spoke as the authorities in Libya, Bahrain and Yemen were waging violent crackdowns on uprisings inspired in part by the Egyptian revolution. The sermon was the first public address here by Sheik Qaradawi, 84, since he fled Egypt for Qatar in 1961. An intellectual inspiration to the outlawed Muslim Brotherhood, Sheik Qaradawi was jailed in Egypt three times for his ties to the group and spent most of his life abroad. His prominence exemplifies the peril and potential for the West as Egypt opens up. While he condemned the 9/11 attacks, he has supported suicide bombers against Israel and attacks on American forces in Iraq.
On Friday, he struck themes of democracy and pluralism, long hallmarks of his writing and preaching. He began his sermon by saying that he was discarding the customary opening “Oh Muslims,” in favor of “Oh Muslims and Copts,” referring to Egypt’s Coptic Christian minority. He praised Muslims and Christians for standing together in Egypt’s revolution and even lauded the Coptic Christian “martyrs” who once fought the Romans and Byzantines. “I invite you to bow down in prayer together,” he said.
He urged the military officers governing Egypt to deliver on their promises of turning over power to “a civil government” founded on principles of pluralism, democracy and freedom. And he called on the army to immediately release all political prisoners and rid the cabinet of its dominance by officials of the old Mubarak government.
“We demand from the Egyptian Army to free us from the government that was appointed by Mubarak,” Sheik Qaradawi declared. “We want a new government without any of these faces whom people can no longer stand.” And he urged the young people who led the uprising to continue their revolution. “Protect it,” he said. “Don’t you dare let anyone steal it from you.”
As the uprising here intensified in recent weeks, Sheik Qaradawi had used his platform to urge Egyptians to rise up against Mr. Mubarak. His son, Abdul-Rahman Yusuf al-Qaradawi, is an Egyptian poet who supported the revolution, and, though Sheik Qaradawi is considered a religious traditionalist, three of his daughters hold doctoral degrees, including one in nuclear physics.
Scholars who have studied his work say Sheik Qaradawi has long argued that Islamic law supports the idea of a pluralistic, multiparty, civil democracy.
But he has made exceptions for violence against Israel or the American forces in Iraq. “You call it violence; I call it resistance,” said Prof. Emad Shahin of the University of Notre Dame, an Egyptian scholar who has studied Sheik Qaradawi’s work and was in Tahrir Square for his speech Friday.
“He is enormously influential,” Mr. Shahin added. “His presence in the square today cemented the resolve of the demonstrators to insist on their demands from the government.”
Egyptians streamed back into Tahrir Square, the epicenter of the revolution, for a rally that was part prayer service, part celebration and part political protest. State television put attendance at two million.
A raucous spirit of flag-waving celebration prevailed. Women in full face veils painted their daughters’ faces in the colors of the Egyptian flag. Young men danced to thrumming drum beats on balconies, lampposts and trucks. There were many signs bearing the dual images of a crescent and cross, the symbol of Muslim-Christian unity.
courtesy