It’s getting to be that time of year when we look back at the year that was and make lots of lists. The first one this December comes courtesy of search engine Google. 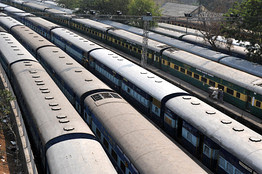 The fastest-rising search term on Google was ‘IRCTC login’, a portal for online bookings for the Indian Railways, which is still the main form of transport for cross-country travel in India.

As part of our daily pulse-taking here at India Real Time, we must admit we like to check in from time to time on Google Trends Hot Searches. It’s one window into what the roughly 80 million Indians who are online are thinking about.
Some days it’s a bit hard to imagine a new arrival in India being able to decipher those search lists, which are frequently peppered with acronyms. Today, for example, there was PSEB 12. Often ICRTC and PNR make an appearance. In mid-November, CAG was up there. More on these terms later.
So we were intrigued by Google’s “zeitgeist” year-end analysis of India in searches, which it put out Monday.
“Google studied the aggregation of billions of queries people typed into Google search in 2010 to compile the Google India Zeitgeist 2010,” said the company in a statement. “We used data from multiple sources, including Insights for Search, Google Trends and internal data tools to compile the same.”
Here’s what they said people were looking for most, with a little analysis from us on where the findings diverged from, or were in line, with what we see day to day.
Most popular search term of the year
“Songs”
Most frequently searched brand name
“Nokia”
Fastest-rising search term
“IRCTC login”
Top “how to” search
“Get pregnant”
Most popular movie
“Kites”
Fastest-rising person
“Aruna Shields”
“Songs,” “Nokia,” “IRCTC login” and “Kites” weren’t very surprising to us.
The Indian Railway Catering & Tourism Cooperation runs online bookings for the Indian Railways, which is still the main form of transport for cross-country travel in India, as well as being the nation’s biggest employer.
And Nokia is still India’s leading cellphone handset provider, though it better watch out for “Micromax mobile,” which was number two in the fastest rising searches.
The Hrithik Roshan movie “Kites” started cropping up well in advance of its opening day, much earlier than movies here usually do.
We were very surprised that “cricket” didn’t appear in the all-time top 10 most popular search terms (although “cricket live score” came in at number five on fastest rising searches, two spots behind “FIFA”) because we feel like we see it pop up in Hot Searches most weeks. Sometimes, when a Test series on, variations on the term take up several of the top 10 search slots.
We were also very surprised not to see either education or job searches in there, except for “how to improve spoken English” at number four among “how to” searches. Most days we see some variation of PSEB 12, which stands for Punjab State Education Board Exam 12th, meaning students in that state are searching for exam results for their final school year. And this study earlier in the year said Indian Internet users spend a lot of their time online on job searches.
In fact, looked at side-by-side and day-to-day in hot search terms, India comes across as way more earnest and worried than the United States. Indians are frequently searching for exam results and for government job openings. Fridays are the exception, when there are usually a couple of movie terms – often including a Telugu movie from southern Andhra Pradesh state – among the Hot Searches.
According to Google’s analysis, Indians are also looking for more information on how to find inner peace than you would think would be necessary in the birthplace of yoga (though of course if you have spent time in rush hour in Delhi or Mumbai, you will know that why that is.) “How to meditate” comes in at no. 10 in the top 10 “how to” queries, leading us to think there is probably a bigger market for commercial spirituality here than exists so far.
By comparison, Americans appear to much more frequently search for new gadgets, television shows and pop music celebrities.
You can compare India’s search results with the United States and with Google’s top global searches for 2010.
This India-related term featured on the top 10 fastest falling global searches: “Slumdog Millionaire.” And “donate to Pakistan” came in at number two in the top 10 fastest rising humanitarian aid-related Google searches, because of floods there earlier this year.