Slumdog is king with 8 Oscars 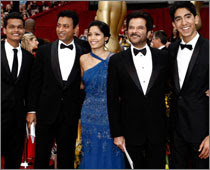 It was the day of the Slumdog at the Oscars! Out of the ten Oscars that it was nominated for, Slumdog Millionaire swept eight Oscars which included two Oscars for music maestro A R Rahman, Best Director for Danny Boyle and Best Sound Mixing for India's Resul Pookutty. The film opened its Oscar account by winning in the Best Adapted Screenplay category for Simon Beaufoy. After that, there was no looking back as the film went on a dream run to win awards in Film Editing for Chris Dickens, Best Cinematography for Anthony Dod Mantle and Sound Mixing for India's Resul Pookutty. 36-year-old Resul Pookutty created history by becoming the first Indian to bag the Oscar for Best Sound mixing . Pookutty shared the Oscar with Ian Tapp and Richard Pryke for their collabrative work for the film "This is unbelievable. I share this stage with two magicians...I dedicate this award to my country," Pookutty said while accepting the award . The biggest success for India came with a double Oscar treat for Rahman for Best Original Music Score and Best Song (Jai Ho). The composer was overwhelmed and interspersed his speech with Hindi as well as Tamil on receiving the coveted trophy here Sunday. "There is a dialogue from an old Hindi film - "Mere paas ma hai" - which means I have nothing but a mother. My mother is here, I have her blessings. I am glad she could be here," said Rahman. He ended the acceptance speech by saying "God is great" in Tamil, something he says after winning every award. He shared the second Oscar for best original song for the film's theme number Jai Ho with noted Indian lyricist Gulzar. "All my life I had a choice between hate and love. I chose love and I am here," said Rahman after receiving his second golden statuette. British filmmaker Danny Boyle won the Best Director award. Boyle was visibly excited and overwhelmed as he said "I want to thank my dad, my sisters and my wife... one person we haven't thanked is the choreographer who directed the last song in the film - Longines. I want to thank him too," said Boyle after receiving the award .
ACCEPTANCE SPEECH BY AR RAHMAN
Before coming, I was excited and terrified. The last time I felt like that was during my marriage. There's a dialogue from a Hindi film called "Mere paas ma hai," which means "I have nothing but I have a mother," so mother's here, her blessings are there with me. I am grateful for her to have come all the way. And I want to thank the Academy for being so kind, all the jury members. I want to thank Sam Schwartz, I/D PR, all the crew of Slumdog, Mr. Gulzar, Raqueeb Alam, Blaaze, my musicians in Chennai and Mumbai. And I want to tell something in Tamil, which says, which I normally say after every award which is... "God is great." Thank you.

Slumdog is king with 8 Oscars