Submitted by admin4 on 15 December 2010 - 1:29pm
By TCN News,
New Delhi: The 17-nation Asia to Gaza Solidarity Caravan got warm welcome in Iran on December 13 when President Ahmadinejad came up to welcome the caravan. He also had dinner with the peace activists. The caravan began its journey on December 2 from Rajghat, the resting place of Mahatma Gandhi in Delhi.
Set out under the leadership of eminent rights activist Feroz Mithiborewala of Awami Bharat, the caravan consists of dozens of human and civil rights groups, mostly from India including Palestine Solidarity Movement and Students Islamic Organisation of India. 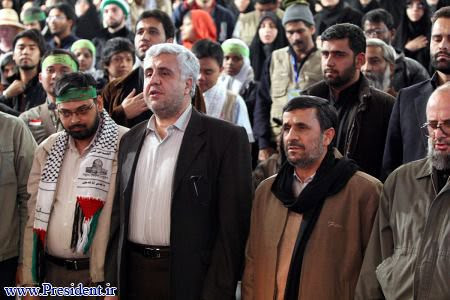 Iran President Ahmadinejad (2nd from right in front row), Gauhar Iqbal of Palestine Solidarity Movement (1st from left in front row), and others in Iran on December 13
Addressing the Asian People’s Solidarity for Palestine convoy, which is traveling through Iran before heading to Turkey, President Ahmadinejad said in Tehran on Monday that “Palestine is the mirror of today's humanity and the past history of mankind.”
“The issue of Palestine and efforts to alleviate the sufferings of the Palestinian people is a humanitarian issue, and the responsibility of all nations, all colors, all races, all ethnic origins and all religions should hand-in-hand enter into a collective effort to solve this greatest problem of humanity today,” the President said. 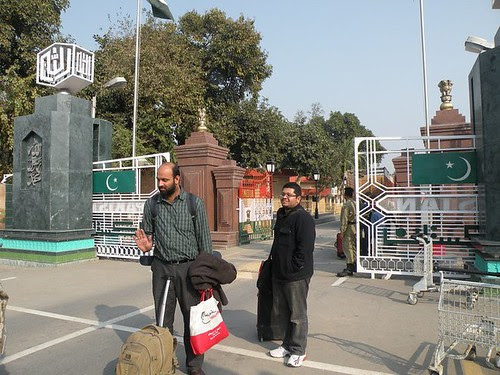 Shaheen KM, Central Advisory Council Member of SIO, at Wagah border
The caravan has eminent figures including Feroz Mithiborewala, senior journalist Ajit Sahi, Gauhar Iqbal of Palestine Solidarity Movement and Shaheen KM, Central Advisory Council Member of SIO and Bashiruddin Sharqi, former president of the students group. The caravan, which was denied entry into Pakistan via Wagah border on December and consequently had to fly its members to Iran, is scheduled to set sail for El Arish from the Syrian port of Latakia on December 26, and cross into Gaza at the Rafah border checkpoint, provided Egyptian authorities approve its passage. Their arrival in Gaza on the day will coincide the second anniversary of Israel’s Operation Cast Lead.
En route to Gaza, the convoy will be joined by activists from Indonesia, Iran, Turkey, Syria, and Lebanon besides other Asian countries. 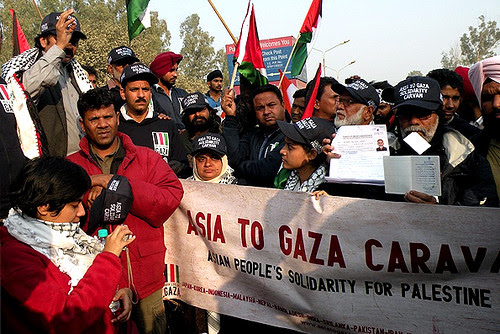 Members of caravan at Wagah border
On 2nd December in New Delhi, the convoy was flagged off by former union minister and senior ruling Congress party leader, Mani Shankar Aiyer from Rajghat. It is said to be Asia’s first humanitarian aid caravan to Palestine. Praising the initiative, Aiyer said: “I congratulate the organisers for taking Mahatma Gandhi’s message of non-violence from Rajghat to Gaza.” The event was also attended by senior Congress leader and former Madhya Pradesh chief minister Digvijay Singh.