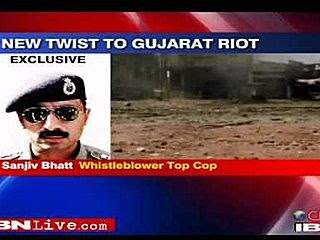 Speaking at the culmination of Gujarat’s golden jubilee celebrations in Ahmedabad, Mr Modi, in a veiled reference to the Opposition, said that he would not bow down to forces which were trying to malign him.
“Every constitutional authority in this country is being misused to carry out opression on me…let them try to do that. I would budge and not bow down to these forces…You try and target Modi but you have been doing this during the state’s golden jubilee celebrations….in this celebration year, these forces rather than contributing to the development of the state have been working against it.” Mr Modi said.
It’s quite amazing and disturbing that till now there were allegations of all sorts on Modi but now even the SIT is under the scanner. It’s difficult to understand, how we can allege someone like Modi, we can mistrust an independent agency of the stature of SIT and give so much weightage to people like Sanjiv Bhatt

Sanjiv Bhatt’s character too is unfolding gradually. There are reports that his career and conduct have been questionable since years. There have been many departmental inquiries against him and even a criminal case for beating someone to death!!! And for the so called intelligentsia, many inquiries are before 2002.

Too much is being read in to the affidavit and media hype of Sanjiv Bhatt, who has been sleeping all through the last nine years of the incidents of riots. Neither he opted to file any affidavit before the Justice Nanvati Inquiry Commission, nor he provided any such information as being allegedly disclosed now to his superior Officer namely RB Shreekumar Adl. DGP in charge of Intelligence, when he filed affidavit before the Nanvati Inquiry Commission.
Yet, the controversial officer has now come out with a theory that he had attended the meeting on 27-02-2002 when alleged illegal instructions were given by the Chief Minister. He has cited the support of a driver, who allegedly took him to the CM’s residence where the meeting took place. In fact the driver had been dismissed from the service long back for serious misconduct of forgery of certificates to obtain the driver’s job. It is strange that the statement of the disgruntled officer and the dismissed driver are being given such hype while ignoring the statements of other most senior Police and IAS officers who remained present during the meeting on 27th February 2002.
Besides, it is also quite unfortunate that the so called intelligent people, who try to allege the Gujarat government for not divulging records, in their blogs & panel discussion on TV channels, have missed one thing that when a junior officer attends any such high level meeting, as per procedure he is supposed to put up the proceedings/ notes before the superior officer about the deliberations. 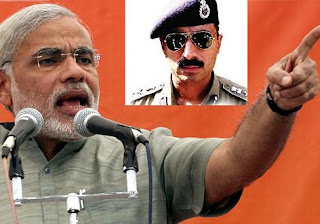 The Intelligence Manual requires that such things are brought to the notice of senior officer in writing. It is difficult to imagine why Sanjiv Bhatt did not do so at the relevant time. In fact, he was posted as DCI (Security) who is supposed to look after intelligence on VIP security and security to vital installations etc. only. Another DCI was there to look after law& order and communal matters.
Sanjiv Bhatt had never been provided “y” category security by the government. There is a procedure to assess threat perception of a person where a committee consisting of the Home Secretary, Additional DGP (Intelligence) and the Joint Director of the Central IB consider the category of the security cover required for a person and on this recommendation such security is provided by the government.
No such recommendation has ever been made for Sanjiv Bhatt. Further, on the reference of the SIT appointed by the Supreme Court, the Home Secretary wrote to the DGP to look in to the security cover for Sanjiv Bhatt.
The DGP provided appropriate security to him.The allegation that the government has withdrawn his security is false and baseless. Sanjiv Bhatt is trying to create false impression deliberately to cover up his misconduct of keeping personnel from Juanagadh at his residence at Ahmedabad.
It may be mentioned that Sanjiv Bhatt has been in the habit of keeping more personnel at his residence in excess of the orderlies entitled. There had been such instances when he was posted at Banaskantha and at Rajkot earlier. Show cause notices were also issued at the relevant time.
At present he has been posted at Junagadh SRP training School where he has joined and went on leave. Currently he is on sick leave on account of his mother’s alleged ill health. Yet he has been keeping the personnel from Junagadh and the vehicle allotted to him at Ahmedabad on the pretext that the SIT would call him anytime for deposition.
Though the SIT has already recorded his statement yet he is claiming this privilege. Besides, an officer can appear in any forum from his place of posting for which one need not to remain present at the location where he chooses to place himself.
It may be mentioned that Sanjeev Bhatt is an IPS officer of 1988 batch belonging to Gujarat cadre, whose career since the beginning of his service has remained controversial. He is facing several departmental proceedings and criminal cases of serious nature. Often he has been taking undue advantage of the government citing different arguments of his actions of omission and commission as part of his duty.
However, many departmental inquiries could not be settled and the criminal cases against him are still pending for which he has been trying to get favour from the government. Even he has not been promoted as IGP though his batch mates have been promoted long back.
He was posted in as ASP Jamnagar district when there was an agitation at Khamabliya. It was reported that he committed excessive use of power and clamping of draconian provisions of TADA on some of the protestors.
Police (ASP) in Jamnagar district was marked with an incident of misuse of power resulting to death of a person. There was a private criminal complaint filed at Jamjodhpur Police station against him on 18-11-1990 by one Shri Amrutlal Madhavji Vaishnani. This case is still pending at Sessions Court at Kahambalia. 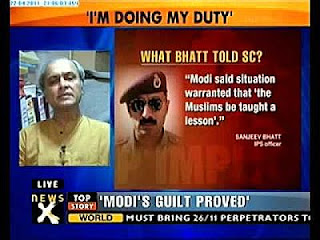 A criminal complaint was filed in 1996 by one Sumer Singh Rajpurohit, an Advocate practicing at Pali, Rajasthan against Sanjiv Bhatt, the then SP, Banaskantha District. A criminal case was registered against Sanjiv Bhatt & others vide FIR No. 403/96 dtd. 18-11-1996 u/s 120B, 195, 196, 342, 347, 357, 365, 388, 458, 482 IPC and Sec. 58 (1) & 58 (2) of NDPS Act. After the investigation, a chargesheet was filed against Sanjiv Bhatt & others u/s 114, 120B, 323, 342, 348, 357, 365, 368, 388, 452, 201 & 482 IPC and Sec. 9, 17, 18, 29, 58 (1) & 58 (2) r/w Sec. 37 of NDPS Act in the Court of Special Judge, NDPS Act, Jodhpur, Rajasthan.
It is mentioned that Sumer Singh Rajput was a tenant of sister of R.R. Jain, a sitting Judge of Gujarat High Court. To get the tenant evacuated for the rented premises, Sanjiv Bhatt, the then SP of Banaskanthe and his subordinate police officers planted more than 1kg of Narcotic drug in one room in a hotel at Palanpur, Gujarat, which was shown that the complainant was occupying the same while the complainant was at Pali, Rajasthan.
The said complainant Advocate was abducted at midnight from Pali on the instructions of Sanjiv Bhatt by his subordinate police staff and brought him to Palanpur, anaskantha in Gujarat.
The said advocate was pressurized by Sanjiv Bhatt and his subordinate police officers to vacate the said rented premises by threatening arrest under offence under NDPSAct. The advocate under pressure vacated the property.
Physical possession of the property was immediately handed over to sister of R.R. Jain, Judge of Gujarat High Court. Sanjiv Bhatt asked released Sumersingh Rajpurohit on 08-05-1996, after filing a report u/s 169 Cr.P.C., in which it was stated that Sumer Singh could not be identified in the Test Identification Parade.
Applications were filed for quashing the criminal complaint filed in Pali at Gujarat and Rajasthan High Court. But the petitions have been dismissed and the criminal case is still pending. Also, the Gujarat Vigilance Commission had recommended twice on 15-07-2002 and 19-10-2006for suspension of Sanjiv Bhatt for his professional misconducts.
His stint as Assistant Superintendent of The Secretary, Bar Association, Pali (Rajasthan) made a complaint before the National Human Rights Commission. The Commission considering the serious human right violation by its order dated 15-09-2010 directed the State Govt. of Gujarat to pay a sum of Rs. One lakh as monetary relief to Sumer Singh, advocate, Pali. The Gujarat government issued order dated 23-12-2010 as per the direction of the NHRC to pay the amount. A cheque was issued on 25-01-2011 in favour of S.C. Rajpurohit.
Since the criminal proceeding is pending against him and as one charge sheet has been issued to him, he has grievances against the state government. He has been trying to get these issues settled and get his overdue promotion as IGP.
It would be amply clear from the above details that the entire service career of Sanjiv Bhatt has remained controversial and wherever he has been posted, controversies have followed him.
He has many issues which are to be settled with government like the pending departmental inquiry, criminal cases and the current posting where he has joined and currently on unsanctioned sick leave to settle. The ulterior motive behind his recent demeanor becomes quite clear with these details.
[Abdul Hafiz Lakhani is a senior Journalist based at Ahmedabad, Gujarat. He is associated with IndianMuslimObserver.com as Bureau Chief (Gujarat). He can be reached at lakhani63@yahoo.com or on his cell 09228746770]
courtesy