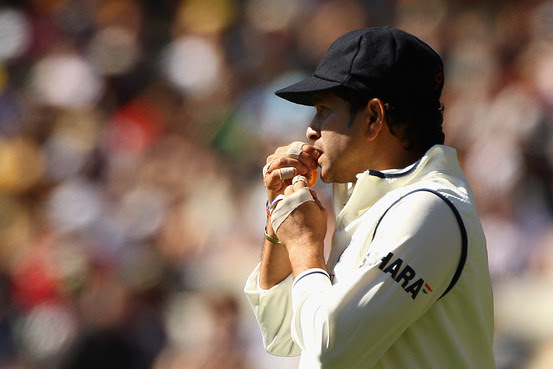 Mark Dadswell/Getty Images
Sachin Tendulkar fielding during the Test between Australia and India at Melbourne Cricket Ground on Dec. 26, 2011.

It took only a few sessions into the Boxing Day Test in Melbourne for the daggers to be drawn. By the end of the fourth Test in Adelaide a couple of weeks ago, the entire cricketing fraternity in India was baying for blood, with even the moderates calling for the retirement of the holy triumvirate: Sachin Tendulkar, Rahul Dravid and V.V.S. Laxman.
From a country whose post-independence identity has been largely built around the unifying worship of cricket (thoughtful historians and sociologists know that any other explanation for an Indian identity is always a bit of a stretch), and from a people who had of late become used to its team actually winning matches, the reaction was not a surprise.

Getting whitewashed by both England and Australia was painful. The Australia tour was seen as a great opportunity for India to win a Test series there for the first time ever, so the thrashing caused much sorrow. It pained a bit that the series loss may have cemented the new captaincy of a cocky Australian whose antics in Melbourne in the previous series in 2008 are still alive in the anguished memory of Indian fans. And it truly, deeply guts the heart out that the series may have extended Ricky Ponting’s stellar career by a couple of years. 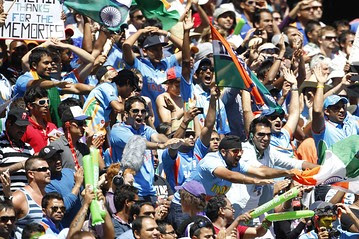 Tim Wimborne/Reuters
Indian fans react as Sachin Tendulkar walks on to the field to bat during the first Test against Australia, Dec. 27, 2011.

So the uproar was to be expected. What is surprising though is that the anger has been directed at a captain and three cricketers who have provided some of the most joyful moments for Indians in the last two decades (just behind, of course, Aishwarya Rai’s crowning as the most beautiful woman in the world and the Pokhran explosion that showed everyone that we have a freaking scary bomb too!)
For those of us who started following the game after the 1983 World Cup and the 1985 World Championship wins, the Indian team – with its persistent mediocrity and occasional acts of treason – taught us some of the most valuable lessons in life: how to be patient; how to keep the faith and stay loyal to an idea despite all evidence to the contrary; and — even more than Somerset Maugham did with “Of Human Bondage” — how to deal with unrequited, undeserving love.
All that changed when first Sachin Tendulkar and then Rahul Dravid and V.V.S. Laxman arrived on the scene. Corralled by an aggressive leader in Sourav Ganguly, they set out to rebuild the team at a time when the dominant story had become less about winning matches and more about the extent of match-fixing in the game. (It is particularly troubling, therefore, that a voice whose opinion was sought last week on the Indian cricket team’s future was one from its sordid past: that of Mohammad Azharuddin, the Congress Member of Parliament and a former India captain who had to leave the game when he was banned for life in 2000 for fixing matches. Why, oh, why would anyone want to know what he thinks?)
Over the next decade and a half, these skillful, proud men gave us reason to wake up in the wee hours of the morning to watch them on television, or to sit in front of computers in distant lands that hadn’t yet been blessed by cricket, repeatedly pressing the “refresh” button, or to sit through excruciatingly painful office meetings and extended PowerPoint sessions, to believe in impossible fightbacks, and to get over broken hearts and frayed friendships. And, sometimes, to even believe that our brave attempt to craft a nation out of this ancient land of contrasting pluralities might actually work!

It is time to blow up the form and structure of the BCCI.The idea, therefore, that the leader of the BCCI (the only custodian and arbitrator of competing interests) can also be the owner of an IPL franchise that operates under rules set by the administration is shocking. If ever the people needed a clear signal from the BCCI that it couldn’t care less about the larger interests of cricket in India, then this is it.
So what should change? Unfortunately, there aren’t too many examples of successful sports authorities in India or around the world that offer alternatives in structures and organizational forms. Too often, sports organizations like the International Olympic Committee and FIFA have been guilty of creating the same commercial webs of interested parties that are on display at the BCCI.
But, some things must change. For a start, the BCCI should open itself to public scrutiny of all its records and financial transactions, as envisaged in the draft National Sports Bill. The answer to the BCCI’s current state cannot be greater intervention from the central government though. The track record of governments running sports authorities is not great, and cricket still remains the only game in India that is at least marginally professionally run. (It is also difficult to remove the nagging suspicion that the bill may be an attempt to claim control of a wealthy sports body by the very few members of the polity who seem to have been left out from the current arrangement!)
That should not be a reason for the BCCI to resist greater transparency in its functioning. Whether it pays taxes or not — its lack of reliance on the government for money was a long standing reason cited by the BCCI to resist greater oversight — its legitimacy comes from being a legal monopoly that is also the temporary custodian of the game. That is a good enough reason for the rest of the country to know how the BCCI is executing its role.
If a bit of sunshine doesn’t disinfect the functioning of the BCCI, perhaps it’s time to experiment with a large dollop of direct democracy. The convoluted network of state associations (whose membership is still doled out like they are colonial country clubs) and the process of indirect elections to the BCCI are part of the reason why the board has become so unaccountable and brazen in its functioning. Given how important the game is to India’s citizens, maybe it is time to directly elect the BCCI President.
Nearly two months ago, one of Indian cricket’s greatest heroes stood up in Canberra togive an eloquent oration about the country and its favorite game.
“In India, cricket is a buzzing, humming, living entity going through a most remarkable time, like no other in our cricketing history. In this last decade, the Indian team represents more than ever before, the country we come from. A sport that was played first by princes, then their subordinates, then the urban elite, is now a sport played by all of India.
One of the things that has always lifted me as a player is looking out of the team bus when we traveled somewhere in India. When people see the Indian bus going by, see some of us sitting with our curtains drawn back, it always amazes me how much they light up. There is an instantaneous smile, directed not just at the player they see – but at the game we play that, for whatever reason, means something to people’s lives.
Everything that has given cricket its power and influence in the world of sports has started from that fan in the stadium. They deserve our respect and let us not take them for granted.”
Rahul Dravid’s words capture the essence of the indictment against the BCCI. It has taken the country for granted and failed in its role as the custodian of the game.
If we are indeed on a witch hunt, let’s at least go after the real witches in the story.
Ajit Mohan is based in New Delhi and writes the Weekend Panorama column for India Real Time every two weeks.  You can follow India Real Time on Twitter @indiarealtime.