MUMBAI—One of India's most famous police officers is on trial—accused of being a killer-for-hire—in a case that embodies the difficulty of trying to clean up the nation's notoriously corrupt crime-fighting forces. 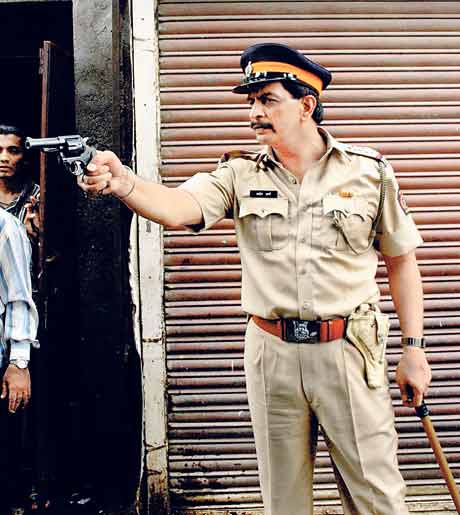 The officer, Senior Inspector Pradeep Sharma, was once so widely revered that two Bollywood movies have been inspired by his exploits. They include the 2004 hit "56 So Far," a reference to the large number of gangsters killed by the big-screen hero.

Today Mr. Sharma is in jail, charged with killing a real-estate broker on behalf of a business rival in 2006, in what is known in India as ◘◘◘
courtesy

S Ahmed Ali, TNN Aug 31, 2008, 10.56am IST
(Inspector Pradeep Sharma. (TOI Photo))
MUMBAI: In one of the toughest actions against corrupt policemen in recent times, the state government on Sunday dismissed high-profile encounter specialist Pradeep Sharma from service for his links with the underworld. Inspector Sharma, once the blue-eyed boy of the city police and who has 112 encounter killings to his credit, was served a notice of dismissal at 1 am on Sunday.

Police commissioner Hasan Gafoor said, "Sharma's dismissal was not prompted by any particular case. We had learnt that he had several undesirable contacts and was involved in underworld activities. The dismissal is an administrative action.''


A senior police officer corroborated his chief's version, saying the decisionwas based on a variety of factors, including Sharma's role as a middleman between gangster Chhota Shakeel and the builder mafia. "Telephonic interceptions have revealed that Sharma used to negotiate extortion threats received by builders and businessman. He also used to negotiate land deals. We wanted to put an end to this,'' he said. Another officer said Sharma "is worth over Rs 3,000 crore''.
Although convinced about his underhand activities, the police knew that it would be difficult to prove them in court. Therefore, the government invoked Article 311 of the Indian constitution whereby an officer can be dismissed without holding an inquiry in such situations. This is also one of the rare cases in which the deputy chief minister took an active interest in ensuring the dismissal of a police inspector.
Sharma is the latest in a series of encounter specialists who have been neutralised. Sub-inspector Daya Nayak, Nitin Vichare, Ravindra Angre and Praful Bhosle are all facing various inquiries. The only exception is inspector Vijay Salaskar, who is posted with the crime branch.
Sharma was once the darling of the media with his pictures being flashed widely after every encounter that he carried out. Sharma has denied the allegations and will challenge the dismissal order in the Maharashtra Administrative Tribunal.
Although he might have seen the action coming ever since he was sidelined following the custodial death of bomb blast accused Khwaja Yunus in 2003, Sharma was totally shaken when his family was informed about his dismissal.
The dismissal proposal prepared by Gafoor was lying with DGP A N Roy for the past month.