I was in search of history, what'r the major News / happenings in the 1st & 2nd of January this year.
for Diverting the media attentions, Govt. in India used to use some gimmicks.
here i found some of the suspicious news, that likely to be deviated from the media attention and image of the Govt. 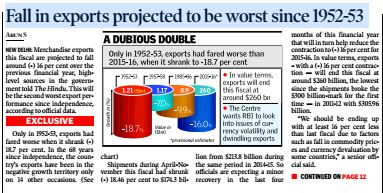 i think this is not a silly matter, after propagating Ache Din and Make in India Program, its not good to see export of India is Declining like anything, as per this report, the fall is around -16% compared to last fiscal year, 2014.  we can have a look in to the news

Merchandise exports this fiscal are projected to fall around (-) 16 per cent over the previous financial year, high-level sources in the government told The Hindu.
This will be the second worst export performance since independence, according to official data.
Only in 1952-53, exports had fared worse when it shrank (-) 18.7 per cent. In the 68 years since independence, the country’s exports have been in the negative growth territory only on 14 other occasions.
Shipments during April-November this fiscal had shrunk (-) 18.46 per cent to $174.3 billion from $213.8 billion during the same period in 2014-15. So officials are expecting a minor recovery in the last four months of this financial year that will in turn help reduce the contraction to (-) 16 per cent for 2015-16.
In value terms, exports – with a (-) 16 per cent contraction — will end this fiscal at around $260 billion, the lowest since the shipments broke the $300 billion-mark for the first time — in 2011-12 with $305.96 billion.
“We should be ending up with at least 16 per cent less than last fiscal due to factors such as fall in commodity prices and currency devaluation by some countries,” a senior official said.
Sonal Varma, India economist, Nomura, said the fall in exports is of concern as several employment-intensive sectors are export-oriented. “Since the demand for exports is down, going forward there will be increasing reliance on the domestic demand,” she said.
Since FY’12, exports have stayed above the $300 billion-mark, though it had fallen by (-) 1.8 per cent in FY’13 to $300.4 billion, then recovering slightly with a 4.7% growth in 2013-14 to $314.4 billion only to contract in 2014-15 by (-) 1.23 per cent to $310.53 billion.
The best performance in terms of year-on-year growth has been in 2010-11 when exports grew 40.5 per cent to $251.13 billion. The other good years for export growth were 2004-05 (30.8 per cent), 1974-75 (30.1 per cent), 2007-08 (29 per cent) and 1973-74 (25.8 per cent), making the top five.
Federation of Indian Export Organisations (FIEO) – the exporters’ apex body — also estimates exports in 2015-16 to end up at around $260-265 billion as companies usually manage their inventories well during the year-end festival season and tend to push exports in the last quarter, said Ajay Sahai, Director General and CEO, FIEO.
However, he said in addition to factors including the weak demand overseas, the fall in commodity prices and the currency volatility, the exports sector was hurt by the delay on the part of the government to release the interest subvention amount as well as the high transaction costs.
Mr. Sahai said the country should target $325 billion in the next fiscal, a growth of 23-25 per cent if global factors help.
The government, meanwhile, is working on a slew of measures to prop up export-oriented firms including Special Economic Zones in the coming Union Budget. Separately, the Centre has called a meeting (likely on January eight) of all the State governments for the first time to expedite the notification of a separate foreign trade policy for each state and to push through infrastructure creation measures that can support exports.
Official sources said the government also wants the Reserve Bank of India to look into the currency volatility-related issues and take measures to help India’s exports as several countries – some of them India’s competitors and others its markets — had chosen to devalue their currency in the last one year, in turn impacting India’s exports.
“The idea is to ensure that our exports are competitive and retain their market share, because once we lose markets it is tough to gain it back,” a senior official said.
The Finance Ministry had, in its mid-year review of the economy, said: “… declining exports seem to be predominantly determined by a decline in world demand. Regardless of the causes, the effect has been a drag on growth.”
“This drag has been about one percentage point even relative to last year,” it added.
However, the Commerce Ministry – the nodal ministry for exports — in a statement said there is no crisis in India on the export front, adding that while there is a need for caution, there is no need for alarm or panic.
Noting that the main reasons for the fall in exports were decline in prices of raw materials used in petroleum exports (crude oil) and gems & jewellery exports (gold), the Ministry said decline in non-oil and non-gems and jewellery exports during April-November was 9.7% in dollar terms and only 3.7% in rupee terms.
“Excluding petroleum and gems & jewellery, India’s exports have not declined significantly. When the export figure in rupees is compared with the average negative wholesale price index inflation rate of (-) 3.3%, the fall in exports in real terms is likely to be negligible in volume terms,” it observed.
courtesy Hindu
the other news i suspected about the new Traffic rule implemented by Kejriwal Govt. at Delhi. Odd & Even number vehicle system. It started 1st Jan and it called as success. there were another called war was going on at Delhi in between state Govt and Central Govt. 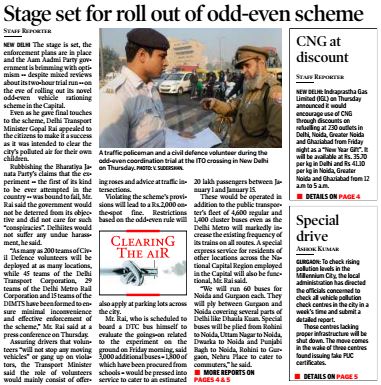