A Short History of Bio-Chemical Weapons

A Short History of Use of Bio-Chemical Weapons

The U.S. and its allies have long been complicit in the manufacturing and use of biological and chemical weapons, yet has targeted other countries for alleged possession and use of these same weapons. This partial chronology is intended as a starting point for critical research and analysis of bio-chemical weaponry and foreign policy. 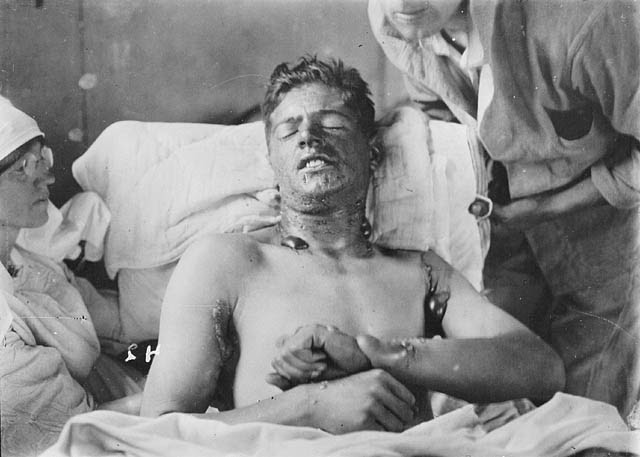 A Canadian soldier with mustard gas burns, ca. 1917-1918. Credit: Library and Archives Canada
400s B.C.: Spartan Greeks use sulfur fumes against enemy soldiers.
256 A.D.: Sasanian Persian Empire may have used toxic smoke against Roman soldiers in a tunnel in modern-day Syria.
1346: Tatars catapult plague-infected corpses into Italian trade settlement in Crimea.
1500s: Spanish conquistadors use biological warfare used against Indigenous peoples in the Americas.
1763: British Gen. Jeffrey Amherst advocates use of smallpox blankets against Native peoples during Pontiac’s Rebellion. Smallpox blankets given to Native delegates during talks at Fort Pitt.
1789: Smallpox ravages Australian Indigenous communities in New South Wales; debate persists whether the British deliberately introduced it.
1800s: Smallpox, measles, and other diseases ravage Native American and First Nation communities; U.S. and British/Canadian officials use quarantine techniques to isolate diseases in white communities, but not in Native villages.
1845: British attack Maori resisters with poison gas in Battle of Ohaeawai, Aotearoa/New Zealand.
1907: Hague Convention outlaws chemical weapons; U.S. does not participate.
1914-18: World War I begins; Germans introduce chlorine gas at Second Battle of Ypres. Poison gas such as mustard gas and chlorine gas produces 85,000 deaths, 1,200,000 injuries on both sides.
1919-21: Poison gas used in Russian civil war, against rebels by the Bolsheviks, and against Bolsheviks by the Royal Air Force.
1920s: Spanish and French forces use mustard gas against Berber rebels in Spanish Morocco. Britain proposes use of chemical weapons in Iraq “as an experiment” against Arab and Kurdish rebels seeking independence; Winston Churchill “strongly” backs the proposed “use of poisoned gas against uncivilised tribes,” which was apparently not carried out.
1928: The Geneva Protocol (first signed in 1925) by the League of Nations prohibits gas and bacteriological warfare; most countries that ratify it prohibit only the first use of such weapons.
1935: Italy begins conquest of Abyssinia (Ethiopia), using mustard gas.
1937: Japan invades China, widely uses chemical weapons in war to conquer China, and used biological weapons such as plague-carrying fleas.
1939: World War II begins; both sides decide not to use bio-chemical arms in large-scale attacks, due to fears of retaliation in kind.
1941: U.S. enters World War II; President Roosevelt pledges U.S. will not be first to use bio-chemical weapons.
1942: German forces may have used poison gas against Soviet resisters in tunnels during the Battle of Kerch in Crimea.
1943: U.S. ship damaged by German bombing raid on Bari, Italy, leaks mustard gas, killing 1,000.
1945: When concentration camps are liberated, inmates report that Germans have used Zyklon-B in the extermination of civilians. Japanese military discovered to have conducted biological warfare experiments on POWs, killing 3000. U.S. shields officers in charge from war crimes trials, in return for data. Soviets take over German nerve gas facility in Potsdam. The Nazis had stockpiles of nerve gas against which the Allies had no defenses, and had also been working on blood agents.
1947: U.S. possesses germ warfare weapons; President Truman withdraws Geneva Protocol from Senate consideration.
1949: U.S. dismisses Soviet trials of Japanese for germ warfare as “propaganda.” Army begins secret tests of biological agents in U.S. cities.
1950: Korean War begins; North Korea and China accuse U.S. of germ warfare–charges never proven. San Francisco disease outbreak matches Army bacteria used on city.
1951: African-Americans exposed to potentially fatal simulant in Virginia test of race-specific fungal weapons.

A Short History of Bio-Chemical Weapons