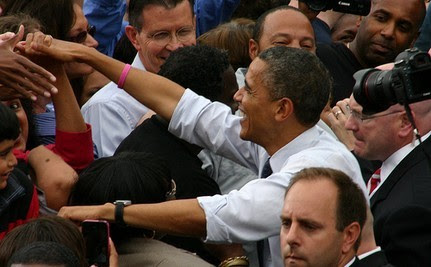 President Barack Obama made history Tuesday night, becoming the first African American to be re-elected President of the United States.
Obama defeated former Massachusetts Gov. Mitt Romney, who had argued that Obama was to blame for the pace of economic recovery after the 2008 financial meltdown. Obama’s win was a stamp of approval for the president, who has argued that his policies have been helping the economy recover from the worst financial downturn since the Great Depression.
Obama’s win also represents a huge victory for the civil rights of women, LGBT individuals and immigrants, and likely cements into law the Obamacare health care reforms, which Romney had pledged to repeal.

Moreover, Obama’s victory was a triumph over a policy of obstruction from the Republican Party, that began the night of his inauguration and continued throughout his first term.

Health Care Now Secure
Perhaps the most significant policy impact of Obama’s victory is the long-term health of the Affordable Care Act, which goes fully into effect in 2014. Republicans had promised to repeal the measure, but with Obama having won, they will be unable to do so before the law is enacted, and before many of its best features go into effect. Obama’s victory also ensures that mandates for coverage of contraceptives for women will continue, a mandate Romney had promised to overturn.
Obama’s victory also means that changes to Medicare that had been championed by Rep. Paul Ryan, R-Wis., are unlikely to be enacted. Ryan, the vice presidential candidate for the Republicans, had argued that Medicare should become a voucher program, which risked ultimately raising the cost of health care for people who qualify for the program. Obama has been steadfastly opposed to any major changes in the Medicare program, and has instead pushed for cost control measures based on improving efficiency in the system.
Women, LGBT, Immigrant Rights Safe

Obama’s victory also keeps abortion rights secure for the next four years. The Supreme Court currently has a 5-4 majority in favor of choice, and there was fear that Romney could have appointed a justice to tip the balance against abortion rights. Obama’s victory also ensures that his executive order extending temporary amnesty to undocumented immigrants brought into the country as children will be allowed to stand.
Obama also will continue to be a strong advocate for LGBT rights. It was not a major issue during the campaign, but Obama campaigned as a supporter of same-sex marriage, and has won re-election with that as his policy. His administration is likely to continue to push for the extension of rights to LGBT individuals, something that a Romney administration certainly would have opposed.
“Fiscal Cliff” Looms
The first major test for the newly-elected president is the so-called “fiscal cliff” — the combination of expiring Bush tax cuts and mandated cuts in spending set to occur before the end of the year. Obama has been clear in arguing that he will not accept the extension of tax cuts for the most wealthy. Republicans have demanded extension of all cuts, but with Obama winning re-election, it is hard to see how they would be able to force him to accept that extension.
Nevertheless, the negotiations represent a danger for all sides. Economists have warned that if all spending and tax policy continues unchanged that it could have a catastrophic effect for the economy, potentially throwing the country back into recession. Both Obama and Republicans will have strong incentive to find a solution that works for all sides.
Overcame Obstruction

There is no guarantee that the fiscal cliff can be avoided, of course. Obama’s victory is made  more impressive by the fact that Republicans had worked to defeat him since the very beginning of his presidency. At one point, Senate Minority Leader Mitch McConnell, R-Ky., even said that the most important goal of Republicans was to ensure that Obama lost re-election.
That has meant that Republicans have opposed Obama at all turns, from refusing to support a stimulus package in the depths of the Great Recession to forcing cloture votes on nearly every major piece of legislation to wind its way through the Senate.
Republicans bet on the idea that by throwing enough sand in the gears and making it hard for Obama to govern, they could ensure his defeat and the resurgence of the Republican Party. They lost that bet. Now comes the question: Will Republicans seek to double down on the same strategy? Or will they work with a president who has won re-election despite their best efforts — especially now that the president cannot seek re-election again?
The next two years, certainly, will be defined by the way Republicans choose to answer that question. One thing is certain: whichever way they choose to answer, they will still have to deal with the man they sought to sandbag.